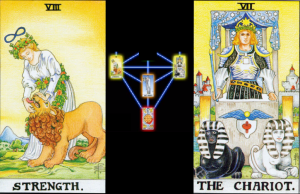 Coloured cards represent a dualistic emanation along the tree of life or a dualistic chakra,

With strength and the chariot cards as the solar plexus also known as the will centre,

The wheel of fortune is at the root chakra which connects us with the physical plane,

While the hermit is the sacrum chakra or the desire centre through which light we desire to obtain,

The Two yellow cards represent the dual nature of the will which is both an internal and external manifestation,

With the strength card representing courage, a quality which is an internal emanation,

The Courage to overcome all the fears that lie within,

Symbolized by the woman using her bare hand to tame a lion by holding its nose and its chin,

With an infinity symbol over her head meaning she is coronated as an illuminate,

One who DOES know thyself and conquering her fears which she literally obliterates,

The CHARIOT is the secondary aspect of the plane of will and the solar plexus chakra,

Representing the WILL to act in the world or put more simply external willpower,

With BOTH qualities having to be activated if changes are to unfold,

That is why the chariot driver is using the feminine force of care and the masculine force of action,

Represented by the 2 sphinxes and the wand to ensure a balanced and compassionate direction,

He is also crowned showing that he is another illuminate,

Showing that this is one of the paths to illumination when acting in the proper moral way.